24 drawbar bands cycle to life in the Circadian Oscillator, producing pitch by variable sample rate or guided by phase step-through triggers. Define your own waveform, then stretch/mutate/wiggle/evolve/transform it with a variety of tools. With parallel mono and polyphonic connectivities, extensive CV control of everything, and a supporting cast of expansion control modules, this device is a capable engine of sound, with timbres to spare.

Drag the orange bars into place, use the forward/reverse switch or its CV jack to flip its direction, send a trigger to the reset/pos jack to synchronize it to another oscillator/clock. An octave switch makes it quick to travel from bass to top. Manually step through the 24 bars by sending triggers of various voltages (1/24th of 5V for the first bar, 2/24ths of 5V for the 2nd…) especially a sawtooth that’ll sweep through the waveform as guided by a secondary oscillator, whether at LFO or audio rates. CV control of fine tuning can introduce warble and dramatic sweeps can be achieved with coarse tune. The onboard volume/CV can be used to establish vibrato with an LFO and act as an amp with an envelope, or it’s just a convenient way to set the volume. The array of gold knobs at the bottom adjust the degree to which the bars respond to modulation and another row above the orange bars acts both as a modulation bias and as a physical recording medium for waveforms, preserving your drawn shapes as you add expansion modulators. Just above, a white button flattens these knobs to wipe things down. Three poly jacks (bottom right) are designed to accept expansion modulator units that have different approaches to controlling the waveform.

Of the expansion modules, the Amplitude Instantiator acts like a preset module where the knob locations take over control of orange bar locations. With the green toggle or its neighboring CV jack, a particular waveform can be instantly drawn to the bars. Connect several of these units, deploying them for rapid changes, perhaps by sequencer. The Modulator Breakout alternatively provides 24 jacks so that the orange waveform can be defined by external cv sources like LFOs, envelopes, and beyond. The Modulator Interface combines these two for cases where you want something in between. The Waveform Memorizor banks eight sets of saved knob positions, switching between them with the green buttons or triggers to their CV jacks. The highlight module, the Waveform Evolver sequencers four layers of waveforms defined by knobs, and smoothly interpolates transitions for something like wavetable behavior, but askew idiosyncrasy. 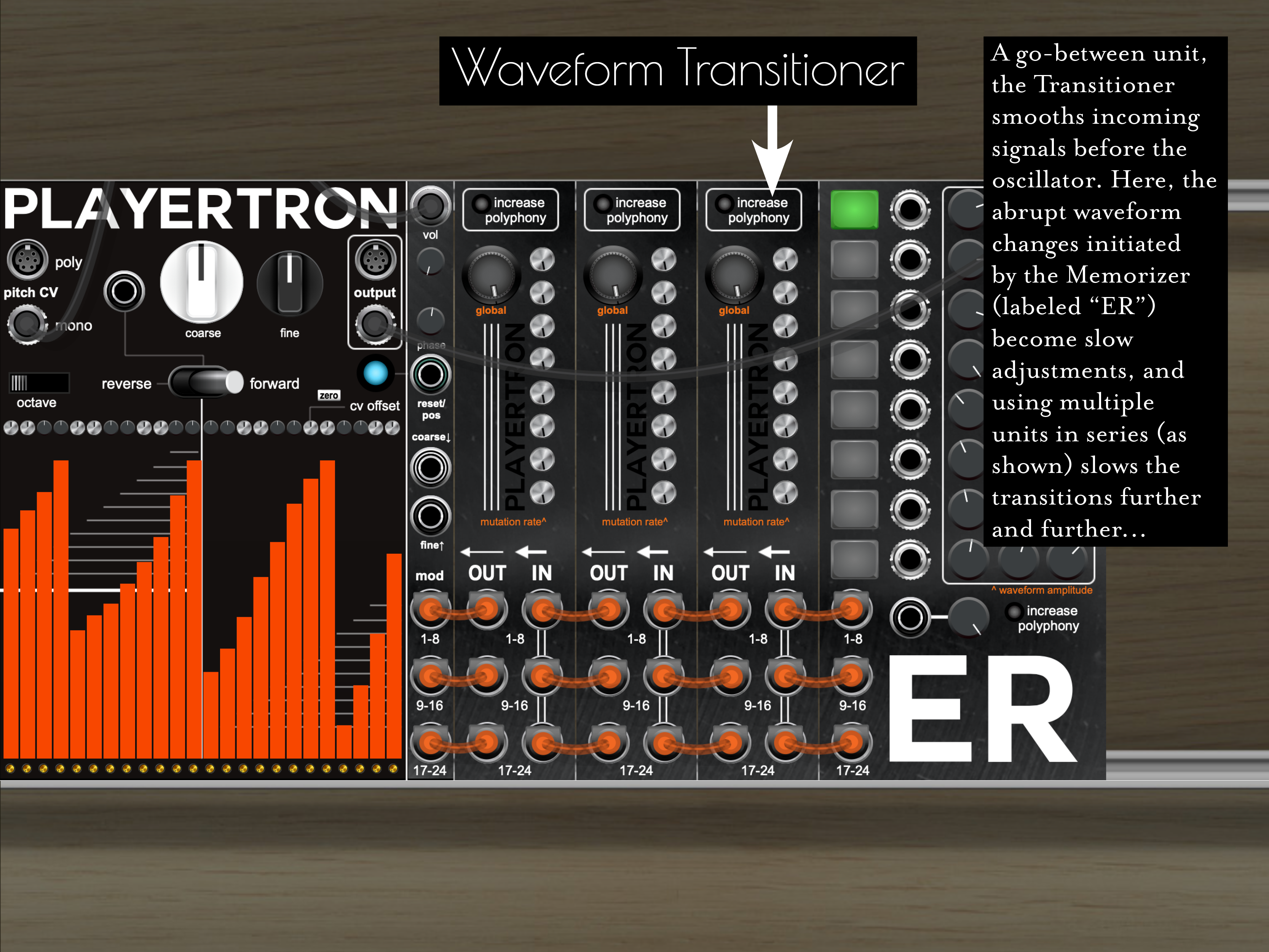